I have been wandering in the wilderness for years like an Israelite without hope of a cinnamon roll recipe that I just adored. Because of my fear of attempting homemade bonafide yeast bread, I tried pre-made packets that I stirred with water and somethin else. And I've tried other people's recipes but the rolls weren't those big fluffy ones that I was longing for. You know the ones the cafeteria ladies always served in elementary school that were as big as your face and took up the whole square on your divided tray? THAT'S what I've been looking for. And then it dawned on me when we were devouring a pan of Euna Mae's homemade yeast rolls....coat that dough in cinnamon, sugar, and butter then soak them with sweet sugary frosting! And that's what I did! Promised. Land.

I made three pans of the most beautiful cinnamon rolls so I could share them with a friend. I was so happy to share, and then I was sad that I shared because we ate our pan so fast that we couldn't have seconds. But then I got a text from that friend who lived through the hardest season of life ever, and the text said "Those cinnamon rolls were the best I have ever had!!" Totally thrilled my soul. Food speaks love, y'all. Don't ever forget it!

So here we go! No more wandering...

-for the filling-
1 stick unsalted butter, very much at room temperature so it's spreadable
3/4 to 1 cup sugar plus a little more for sprinkling in the pan
plenty of cinnamon

Preheat oven to 200 degrees to create a 'warm place' for the first rise.

For the dough, place 1 1/2 cups milk in a small saucepan and bring to a simmer. Remove from the heat, and stir in the stick of chopped butter and the 1/2 cup of sugar; let cool.  Add yeast and 1 tsp sugar to the 1/2 cup of very warm water and whisk gently til dissolved; allow to rest for 10 minutes until it's foamy on top.

Note: It is critical that you use fresh yeast, not yeast that you dig out of the back of your panty from when you built your house in 2004. Yeast looses its pizazz after a few months. So be sure it's fresh so your rolls will rise!


Combine milk mixture, eggs, yeast, salt and 1/2 of the flour in a mixer with the dough attachment, and mix until smooth on low speed. Add the remaining flour, 1/2 cup at a time, and stir until a smooth ball forms. Remove from the bowl and knead by hand on a floured surface for about 5 minutes until the dough is combined and smooth, and a gentle finger-poke in the top presses in but slowly springs back a little.

Now turn the oven off.

Place the dough in a large greased bowl, cover with a light dish towel that is barely damp - and I mean barely - and let is rise in the warmed oven until it has doubled in bulk, about 60-70 minutes. It will spread and fill the bowl more than it will actually rise up. So don't be scared.  At about 30-35 minutes of the first rise, you may turn the oven back on to 200 for just a minute and turn it off really quickly to maintain a little heat in there, as it has surely cooled by this time. Resist the urge to open and close the oven door.

Remove the bowl of dough from the oven.
Preheat oven to 200 degrees again to create a 'warm place' for the second rise.

Turn the dough out onto a floured surface, and punch the dough a few times with a firm fist letting the air out. Sprinkle with a little flour as needed to keep it from being too sticky. Roll the dough into a long, wide rectangle. Spread the dough with the one-stick of very room temperature butter, and cover with sugar and cinnamon. Starting with the long end, roll into a log and pinch together to seal the edge; then cut into 1.5" slices.Turn the oven off.

Spray your choice of pan or pans with baking spray, then sprinkle the bottom of the pans with a little more sugar. Yum, right?! Lay the cinnamon roll slices in the pan almost touching. 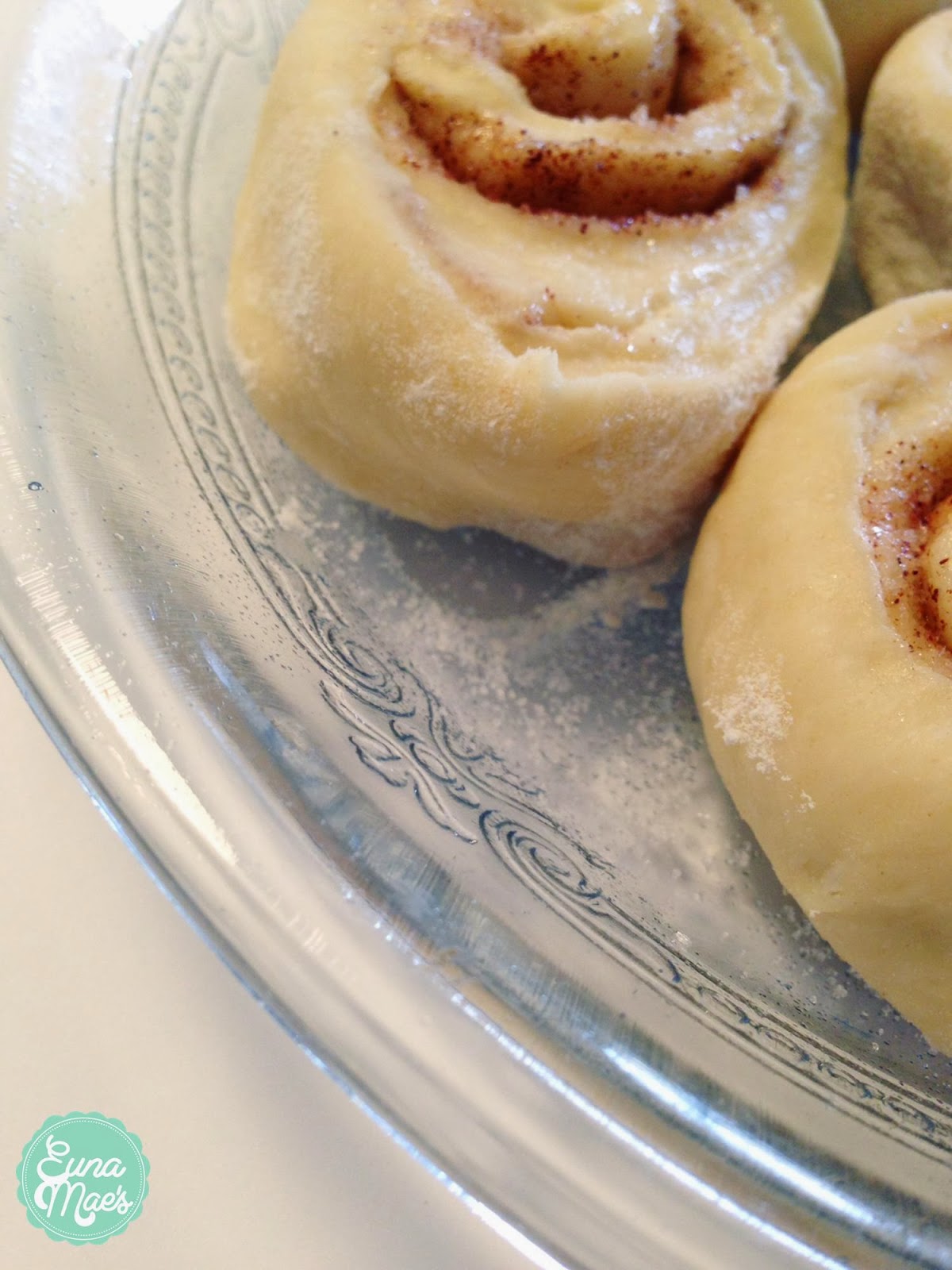 Cover loosely with a light kitchen towel and return to the warmed oven for a second rise. Allow to rise at least 40 minutes or longer until they have doubled in size and are squished up next to each other. Remove the rolls from the oven.

For baking the rolls, preheat the oven to 350 degrees. Bake rolls uncovered for about 25 minutes, until golden brown but not terribly brown or they'll dry out. Begin checking rolls at 20 minutes and then check again every 2-3 minutes until done.

While the rolls are baking, stir together the melted butter, powdered sugar, extracts, and tablespoons at a time of the warm milk until the icing is the desired consistency. I like a lot of icing that is drizzly enough that it'll sink down into the crevices of the rolls rather than a big thick layer of icing just on the top of the rolls. Add more powdered sugar/milk to increase the amount of icing and to get the consistency that you prefer.

Allow rolls to sit for 2-3 minutes before icing them.