Pull up a stool...how to sear meat for big flavor! 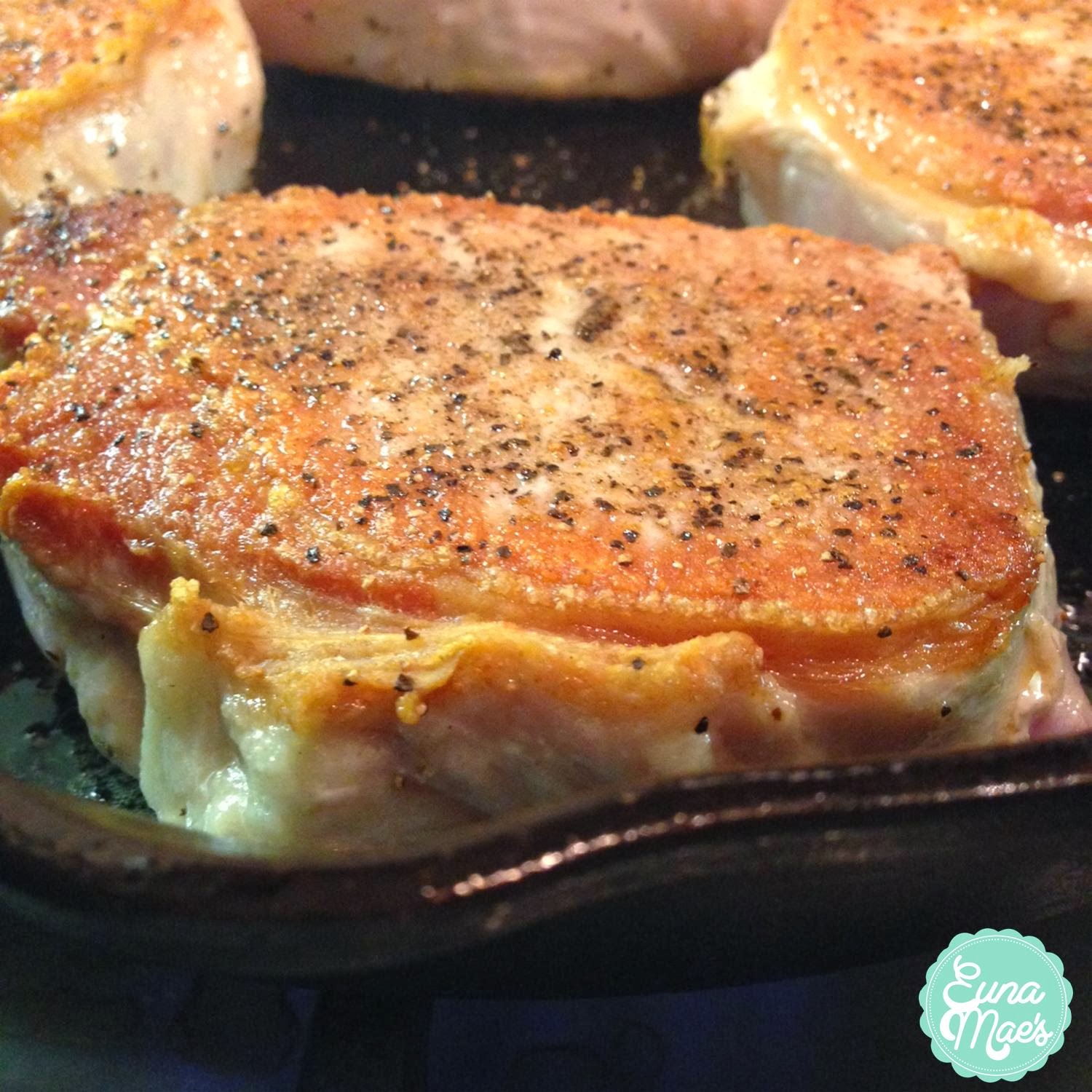 If you've taken a minute to "Meet Euna Mae" {here} then you know that I learned a lot from her by pulling up a stool and watching her cook, asking questions, observing, and gaining an understanding of kitchen basics. So I invite you to pull up a stool...and learn how to get big BIG flavor in your meat by learning how to get a good sear!

Yesterday, I posted a recipe that I made straight off the pages of Southern Living magazine. The skillet pork chops with apples and onions were so flavorful, and a lot of the flavor - maybe my favorite flavor of all - came from the beautiful golden brown sear on the chops themselves. In the words of Food Network's Chef Anne Burrell, "Brown food tastes good." And boy is she right!

Searing meat is the technique of browning meat in a smokin' hot pan to create a caramelized, savory flavor. It was once thought that searing meat held in juices, but in culinary circles that theory has become a myth. But it is inarguable that searing meat gives a boatload of flavor by creating a dark, near-crisp caramelization that we as human beings love. The opposite of seared meat is a grayish, non-flavorful, very unexciting meat. And we as human beings are NOT in love with gray, dull meat. Right?!

And while we're on the subject - although I am not officially posting the recipe for pot roast today - this THIS is one of the biggest tips in making a mouthwatering roast. I know there are a lot of recipes for slow-cooker roasts that do not call for searing the meat first; but I'm telling y'all...sear. your. roast. This technique will transform all of your dishes where your meat braises in liquid, bakes in the oven, or cooks in your crockpot all day.

Oh, yes. Searing meat requires effort. But "mouthwatering" is worth it. Or you can take fewer steps and savor a plateful of gray meat if you'd rather....

HOW TO SEAR MEAT FOR BIG FLAVOR

1. Prepare your meat by cubing or twining your meat etc. according to your recipe's directions. Dry the meat by patting with paper towels.

2. Heat a cast iron or stainless pan over medium-high heat with enough vegetable oil to just cover the bottom of the pan. When the oil shimmers, is very fluid, and just starts to smoke, it is ready for the meat.

3. While the pan is heating, salt and pepper the meat generously. Salting the meat and letting it stand too long before searing will draw unwanted moisture out of the meat; so salt/pepper just before placing the pan.

4. Carefully set the meat in the pan (cubes for stew, a whole roast, individual pork chops etc.) and they will immediately sizzle! Be sure not to crowd the meat, otherwise they will steam and they won't sear properly. Resist the urge to look at or move the meat! It will initially stick to the pan which is just fine. Then as it cooks and forms that dark, caramelized 'crust', it will loosen for turning. Sear meat without moving for at least 1.5-2 minutes before turning over to sear the other side. Larger, thicker cuts of meat may require 3-4 minutes per side like the bone-in pork chops in the Southern Living recipe mentioned in this post. Turn the meat over using tongs and sear the other side. If searing cubes for stew, you may need to transfer seared cubes to a plate and sear the rest of the meat in another batch. Yes, it's work; but the payoff is divine.

*This is when you would move your slow-cooker roast to the crockpot, cover with liquid, and start the cooking-all-day method. Gosh, there's so much to say about roast....I'll save it for another day.

5. After searing the meat, continue with your recipe as instructed. You may pour wine or stock in the pan and stir like crazy to deglaze the plan - loosening the scrumptious, meaty, crusty bits of flavor that are left in the pan's bottom. You can also use this liquid as a braising liquid to continue to cook the meat. Just follow the instructions in your recipe!