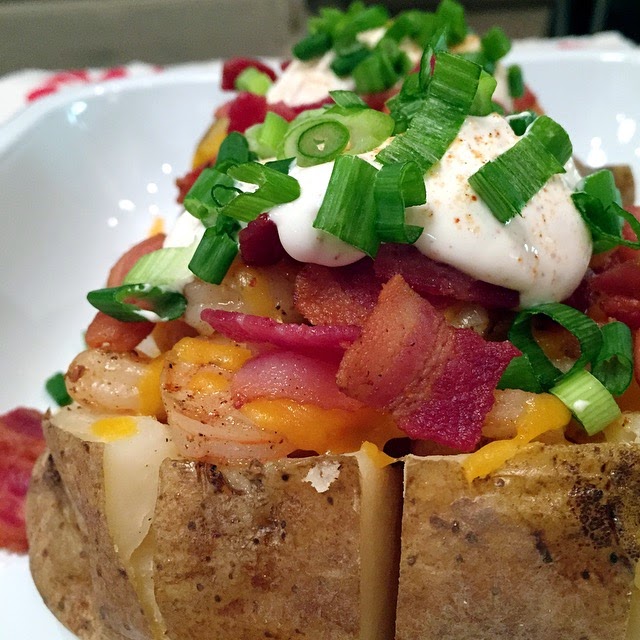 Frozen shrimp. It's magical. It's easy. It cooks in a blink. And miraculously, everyone in my house likes it. So I have come up with all kinds of ways to cook with it. Pastas, sandwiches, bakes, and served over grits. But this may be my favorite way we eat shrimp. Spicy and sauteed and spooned over steaming hot baked potatoes with crispy applewood bacon, cheese, and creole sour cream.

When I first made these, I went to the trouble - and I mean TROUBLE - to scoop out the baked potato innards, mash them with toppings, and spoon them back into the skins. I have since learned that it is a step I can easily skip. So this recipe became instantly faster and simpler - which we love, don't we?!!

I'll tell ya what else is fabulous about these spicy creole baked potatoes....they're a one-plate meal. Hearty and flavorful. Filling and satisfying! And should we even mention how beautiful they are? They're beautiful. And perfectly delicious. 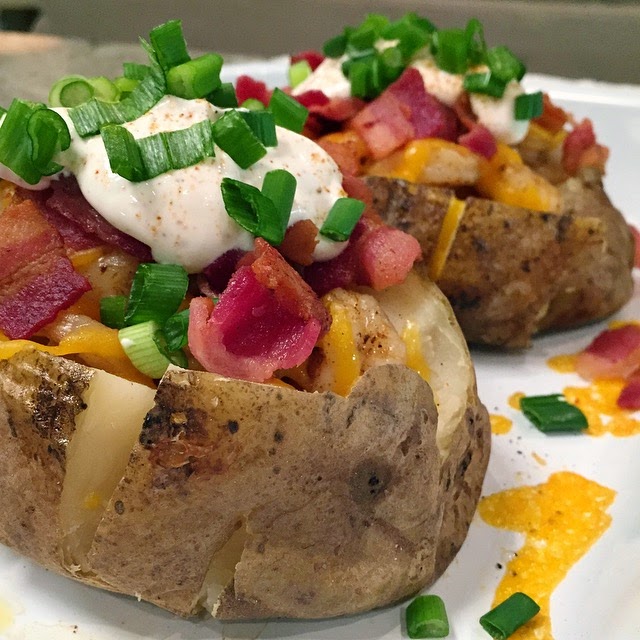 Bake potatoes as instructed until you can put on an oven mitt and gently squeeze the potatoes in the oven to see if they're tender. If they give with a little squeeze, then they're ready!

While potatoes are baking, cook bacon pieces in a heavy skillet until almost crispy. Using a slotted spoon, remove to a paper towel-lined plate; set aside. Keep the bacon drippings in the skillet on low heat while you prepare the shrimp.

Pat dry the thawed shrimp between two paper towels. Season with several teaspoons of creole seasoning. Turn the heat back up to medium under the skillet, and saute the seasoned shrimp in the bacon drippings. Saute, stirring often, only a few minutes until the shrimp turn light pink and lose the gray-ish transparency. Using a slotted spoon, remove the shrimp to a plate and cover to keep warm.

Remove the potatoes from the oven, carefully take off the foil, and line up the potatoes on a baking sheet. Cut one long, deep slit lengthwise without cutting the potato completely in half; then cut three slits the short way (It'll look like football laces!). Then take each end of the potato in your fingers and press the potato inward to pop open the center to make something that resembles a little potato bowl.
(Loose interpretation of a potato bowl...work with me, people.)

Starting deep inside the potato...salt and pepper the potato, drop in a few pads of butter, then cheddar cheese. Then pack on the shrimp til it's nearly overflowing the potato. Finally, top with another little sprinkle of cheese. Repeat on each potato. Put the potatoes back in the oven to let the cheese melt, about 5-7 minutes.

In the meantime, in a small bowl whisk together 1 cup of sour cream and 2 teaspoons of creole seasoning.

Remove the melty, cheesey, shrimp-y potatoes from the oven. Top with crumbled bacon, a dollop of creole sour cream, a sprinkle of creole seasoning, and finish with green onions.