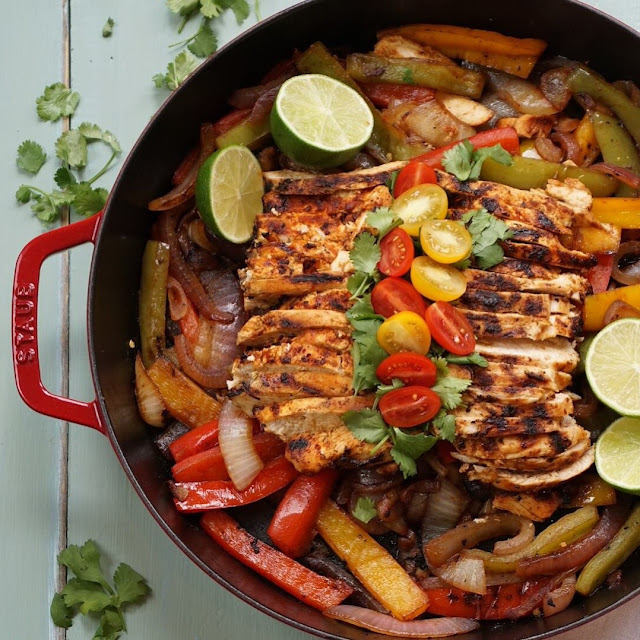 When Sam and I were dating, we'd go out to eat and share Fajitas for Two at any restaurant that would offer it on the menu. We. Love. Fajitas. Mmmm, with yummy queso and guacamole! Ugh, we can eat ourselves sick on fajitas and queso! After we got married, we decided we wanted to learn how to make reallly good fajitas at home. So we worked on a recipe doing a little of this and a little of that. We tried different skillets, different marinades, different seasonings. And after a few years of trying a few variations, we've landed. I made us finally write it down so we'd know every time what we did that made them so good! Then I even had him as a guest on my cooking show so we could make these for y'all step by step! WATCH THE EPISODE HERE. They require a little bit of chopping, but very little skill. Worth every single second!

Two equipment notes real quick! In order to get a good caramelization on your veggies, you need a cast iron skillet. Go find one at a flea market, get your Grannie's, or run to Euna Mae's and get a double-handled big boy like I have here! It's dreamy, gang. And also, grill the chicken on an outdoor grill. We tried to do chicken inside, but the flavor from the grill and those charred grill marks is unbeatable! Spoon out the queso, and let's get going!

3 chicken breasts, pounded and flattened a little on the thick end

In a small mixing bowl, whisk together the marinade. Put chicken in a zip top bag and pour marinade over. Massage into meat. Let marinate in the refrigerator for at least an hour or as long as four hours. Don’t marinate overnight or the lime juice in the marinade will break down the texture of the meat. Mix dry rub together in a small bowl. Remove chicken from marinade, allow marinade to drain off, and generously season both sides of chicken breasts with dry rub mix, reserving about a teaspoon for the vegetables. Grill for 7 minutes on each side. Remove from grill onto a rimmed baking sheet, and cover with foil. Covered chicken can stay warm in a 200 degree oven until time to slice and serve.

While chicken is grilling, preheat a large cast iron skillet over medium-high heat with just a little oil drizzled in the bottom. Saute onions and peppers until tender with a little color. Season with 1 tsp of seasoning/rub mix plus a few good pinches of salt. As vegetables finish up, cut chicken into thin slices, and add to the skillet with the hot onions and pepper. Squeeze a lime over the skillet, and splash with a few tablespoons of water to get that restaurant sizzle! Serve with warmed tortillas, shredded cheese, sour cream, avocado, and cilantro.
Posted by Amy Hannon at 7:46 AM